This case is based upon the concept that Acceptance is an essential element of a valid contract. If there is no acceptance, then there cannot be a valid contract. As per section 2(b) of The Indian Contract Act, 1872, acceptance is an essential element of a valid contract. The offeror has all the rights to revoke the offer before it is accepted by the offeree. After being accepted, it becomes a proposal and cannot be revoked. Though the offer has no legal obligations and is not enforceable, after it becomes a promise, a legal obligation is attached to the offer. Some basic elements of a valid acceptance are- it should be given by the person to whom the offer was originally made, it must be communicated expressly to the person who makes the offer, and the acceptance must be absolute and unified. Thus, remaining silent while making the offer implies that the offer has not been accepted and the offeror can revoke such an offer due to non-acceptance. Implied acceptance is also defined under section 8 of the Indian Contract Act, 1872.

Dodds, the Respondent offered to sell his house to Dickinson, the Appellant in exchange for 800 pounds. This information was transferred to Dickinson through a letter being sent to him. But he added one condition that the offer to sell his house is only open till the coming Friday morning. Keeping the same in mind, Dickinson sent someone to Dodds to accept the offer on Friday morning. That is when he discovered that even though Dodd’s offer was limited to Friday, yet he sold his house to someone else on Thursday, i.e., a day before the day that was the offer to the respondent.

Aggrieved by this, the appellant filed a suit against the respondent for breach of contract.

It was argued by the appellant that the respondent offered to sell the house until Friday but made the sale on Thursday, which led to a breach of contract as he did not fulfil his terms of waiting until Friday. He believed that he had until Friday to accept the offer, and thus he did not give his acceptance before it. But selling the house the day before the offer was limited to would be a breach of contract. He also argued that Dodds must communicate the revocation of the offer to the offeree for it to be considered as a valid revocation.

As against this, the respondent argued that he only ‘offered’ to make the sale until Friday. But the appellant did not give any acceptance to the offer to sell. Without an acceptance of the offer, he cannot be stopped from selling the house to someone else. And hence he had all the right to revoke the offer since the other person accepted the offer before the appellant. In his defence, he also stated that he tried to get in touch with Dickinson on Thursday to inform him about the revocation of the said offer. Since he could not find him, he left a note stating the same to Dickinson’s house, with his mother-in-law. 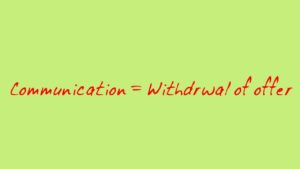 The vase was decided in the favor of the respondent.

It was decided that the offer being opened till Friday was nothing more than a mere promise. It cannot be termed as a contract. A promise can be revoked before the acceptance or consideration is paid by the other party.

There was no acceptance given by the appellant to the respondent, and there was no consideration involved. Thus, this cannot be treated as a contract because of no ‘meeting of minds between the parties. Thereby, one cannot say that the respondent’s actions resulted in a breach of contract.

The main issue here was ‘acceptance to offer’. An offer was made by the respondent to the appellant, that he would sell his house until Friday. The validity being talked about here is for the offer, and not of the contract. There must an acceptance to the offer to enter into the contract. If the offer is not accepted, then there shall be no contract between the parties.