About the Company and the Appellant

Central Inland Water Transport Corporation Ltd was a government company incorporated under section 617 of the Companies Act on 22.02.1967. The company was solely owned and controlled by the Central Government and shared its shares with the State Government of West Bengal and Assam.

Issue of the case 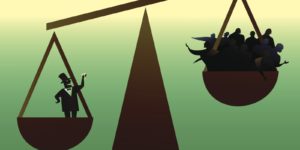 The facts of the case were as follows-

The respondent, Brojo Nath Ganguly used to work in a company, named Rivers Steam Navigation Company that was dissolved as per the orders of the Calcutta High Court. After the dissolution of the company, was thereby working in the plaintiff corporation as per their terms and conditions as the Deputy Chief Accounts Officer. Later on, he got promoted to be their Deputy Financial Advisory and then as a Chief Accounts Officer.

The case issue began when the plaintiff was sent a confidential document that stated his involvement in an issue due to the neglected maintenance of the Provident Fund of the corporation and required him to reply to this letter within 24 Hours.

Even after the response of the respondent to the said letter, he was, thereafter, fired from his position stating that this resignation was in accordance with Rule 9(i) that gives a corporation the power for the layoff of a permanent employee with a 3-months’ notice or 3 months’ basic pay and dearness allowance as salary.

Aggrieved by the decision of the corporation to lay him off without any reasonable ground even though he did reply to the letter that was sent to him, within the time frame mentioned therein, he filed a case against this in Calcutta High Court challenging if his termination was valid under the law, under the provisions of Article 226 of the Indian Constitution. He based his case on the grounds that Rule 9(i) of the act is unconscious and arbitrary in nature and is against the interest of the public at large. 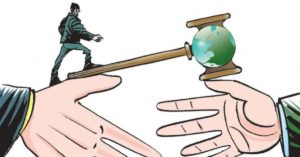 The case was held in the favor of the respondent, Brojo Nath which also resulted in putting a stay at his termination from the corporation. Also, it was decided in this case that Rule 9(i) shall be void as per section 23 of the Indian Contract Act, 17872 that enlists the void contracts because it confers an arbitrary and absolute power on the corporation as it does not state who shall use this power on behalf of the corporation.

Rule 9(i) of The Central Inland Water Transport Corporation Limited- Service, Discipline and Appeal Rules, 1979- This rule states that the corporation has the power to rusticate any permanent employee by serving him a notice 3 months in advance or by paying him a sum that equates to 3 months of his or her basic salary and dearness allowance. The issue of including such a section in the terms of the contract of an employee creates a sense of doubt in their minds with regards to their job security. This provision shall be considered to be against the public good as it disrupts the general interest of the employees.

Rule 9(i) of The Central Inland Water Transport Corporation Limited- Service, Discipline and Appeal Rules, 1979 is by all means against Article 14 of the Indian Constitution, which ensures ‘equality before the law and equal protection of law’ for all citizens of India within the Indian territory.

The Expression “The State” utilized in Part III or IV of The Indian Constitution doesn’t just incorporate the Union of India yet, in addition, incorporates – bodies that capacity under the profound and inescapable control of the government where the dynamics of the bodies and the control lies in the hands of the Government Bodies. Bodies which are considerably subsidized by the Government as seen that every one of the three governments financed it all together and were under the influence and approval of the Central Government, and was overseen by the Chairman and Board of Directors selected by the Central Government and could be taken out by it. These capacities and activities conveyed by the Corporation are of crucial public significance which no question demonstrates that the company is a group of Govt under the Public Sector. Thus, the corporation shall be characterized as a ‘State’ under the provisions of Article 12 of the constitution of India.

The company, Central Inland Water Transport Corporation Ltd is jointly owned by the Central government, State government of West Bengal, and Assam. Since it is held by, controlled by, and is headed over by the government and government officials, there is no doubt to the fact that it is to be considered as a ‘Government Company’ as per the provisions of the act. The functions of the corporation are carried on with the interest of the nation as a whole, one can conclude that it comes under a government body that operates in the public sector.