Hadley v Baxendale[1] is a landmark English caselaw that determines the consequences of loss to one party caused by the negligence of the opposite party in special circumstances.

Is Defendant liable for Plaintiff’s damages that arose due to delay in shipment of the shaft?

It was held that the defendant was not liable for the plaintiff’s losses. The damages flowing naturally from the breach or those in the reasonable contemplation of the parties at the time of contracting are available to the non-breaching party. While the defendant’s breach was the direct cause of the Plaintiffs’ lost earnings, such loss cannot be said to occur naturally from such a breach under normal circumstances. A miller may send a crankshaft to a third party for a variety of reasons. Defendants had no way of knowing that their breach would result in a longer mill outage and a loss of earnings. Furthermore, Plaintiff never informed Defendants of the unique circumstances, and Defendants were unaware of the unique circumstances.

The rule of Hadley v Baxendale consists of two parts:

On breach of a contract such damages can be recovered:

In either way, the resulting damage must be the probable result of the breach of contract.

Under the first rule, compensation can be claimed for any loss or damage that arose in the usual course of things the breach rooms of contract. If the loss does not arise in the usual course of things but is a special loss arising out of special circumstances, then the situation would be covered by the second branch of the rule. In that case, the last can be claimed if the same wasn’t contemplation of both the parties at the time of the making of the contract.

Indian Position on Damages for Breach of Contract 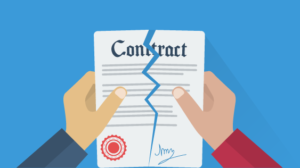 In India, section 73 of the Indian Contract Act, 1872, makes the provision regarding the right of the injured party would it cover compensation for the loss or damage which is caused to him by the breach of contract. it reads as:

“When a contract has been broken, the party who suffers by such breach is entitled to receive, from the party who has broken the contract, compensation for any loss or damage caused to him thereby, which naturally arose in the usual course of things from such breach, or which the parties knew, when they made the contract, to be likely to result from the breach of it.

Such compensation is not to be given for any remote and indirect loss or damage sustained by reason of the breach.

Explanation—In estimating the loss or damage arising from a breach of contract, the means which existed of remedying the inconvenience caused by the non-performance of the contract must be taken into account.”

The provision contained in section 73 (para 1) is similar who the rule contained in the above-stated judgment of Hadley vs Baxendale.

The remedy of breach of contract is to prevent the injured party from loss caused by the other party. However, there are certain circumstances, where the defaulting party cannot fathom the consequences of their actions by using due diligence. The judgement acts as a precedent and protects them from such unforeseen circumstances.